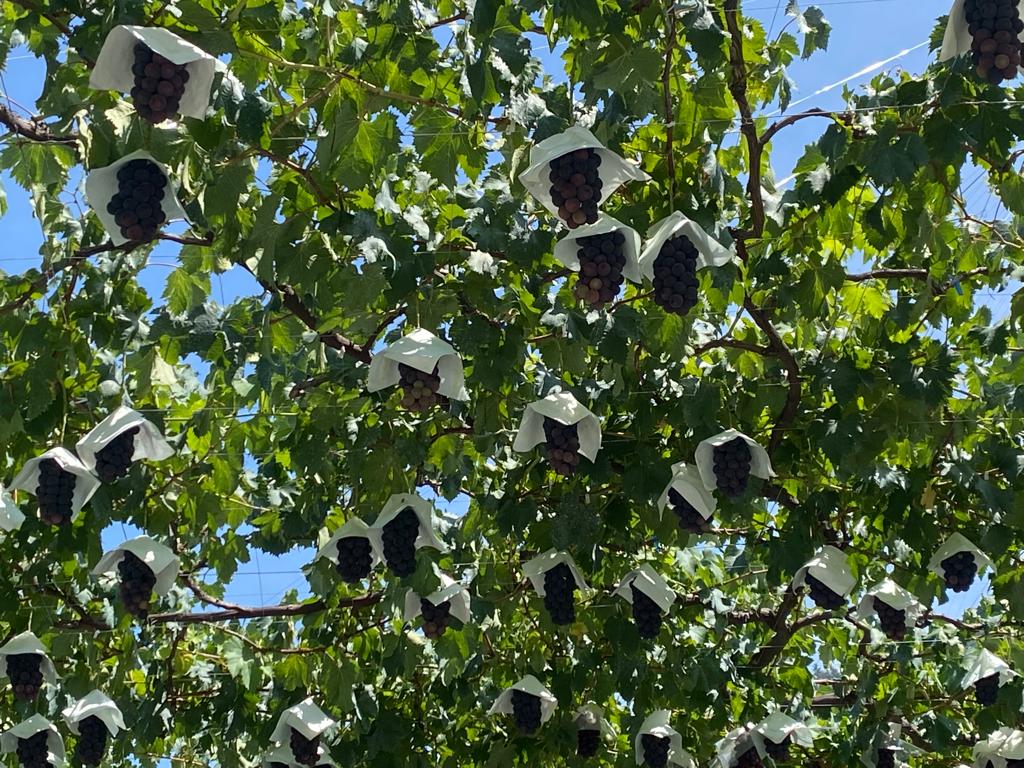 “By this my Father is glorified, that you bear much fruit and so prove to be my disciples.” John 15:8

Recently I went to visit Alistair at his University in Kofu (Koh-foo), the biggest city in Yamanashi prefecture. ‘Yamanashi’ means ‘mountain pear’ but in fact the prefecture is better known for its grapes, producing more than 21% of the national harvest. As you go through the city, it seems that there is a vineyard on almost every corner.

It was almost the start of the harvest, so the vines were laden with beautiful bunches of grapes. However, there was something unusual. Each bunch of grapes was sporting a sort of paper hat. Apparently the rainy season in Japan is at the wrong time for grape growing, so the farmers place wax paper coverings on each bunch in order to protect the grapes as they grow, adding around 10% to the cost of producing the grapes. It is not only a costly, but also a painstaking job to cover every single bunch, but shows how valuable the fruit is to the farmer.

The grapevine is mentioned more than any other plant in the Bible. It appears all the way from Genesis to Revelation and is full of symbolism. In the Old Testament the nation of Israel is often referred to as a vine. And in John 15 Jesus describes Himself as the vine, us as the branches and our Father as the vinedresser. So there is much we can learn from the vine.

I decided to read up a little on vines and would like to share three things I learned which I think can be helpful to us in our daily walk.

I think each of these things has a spiritual parallel.

And just as the fruit of the vine is precious to the farmer so our fruit is precious to God. Indeed, in verse 8 of John 15 Jesus says, “This is to my Father’s glory, that you bear much fruit, showing yourselves to be my disciples.” Just as Yamanashi Prefecture is known for its grapes in Japan, so we are to be known as Jesus’ disciples by our fruit, and that fruit will bring glory to our Father. What an amazing thought!

I don’t know what sort of soil you feel you are planted in just now, or what sort of obstacles you might be facing. Perhaps you are in a season of being pruned. None of these are pleasant and our instinct can often be to ask God to remove the rocks or the obstacle, or stop the pruning. But perhaps these are the very things that God wants to use to help us to bear more fruit for Him. This certainly changed my perspective on the rocks in my soil just now. I hope you find it helpful too.