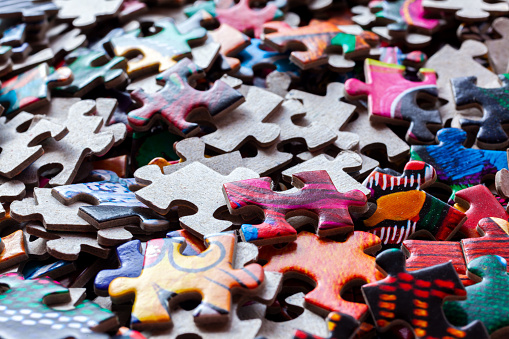 Putting the pieces in place

“Now faith is the assurance of things hoped for, the conviction of things not seen.” Hebrews 11:1

I wonder if you enjoy jigsaw puzzles. I have to admit that I don’t particularly like them – I don’t have the patience required! But my mother is a fan. When I visit, there is often a special mat on the dining room table with a partially finished puzzle that she gradually works on for days, if not weeks, until the picture is finished.

When I read the Bible, it seems to me that some of the stories are a bit like a jigsaw puzzle. God is slowly and steadily putting different pieces in place which will one day form a full picture. In fact you could say that the whole story of the Bible is like that as God puts together the pieces of His plan of salvation.

We find one such story in the book of Esther. The main action of the plot to destroy the Jews doesn’t begin until into Chapter 3, but in Chapters 1 and 2 we see God (even though His name is never mentioned in the book) putting various pieces in place which will be essential to the final picture. For example:

Nearly ten years pass between the feast at the beginning of Chapter 1 and the edict at the end of Chapter 3. During that time, God has gradually been putting all of the pieces into place to enable victory over the plot to destroy the Jews.

When we read these stories, we do so with the benefit of hindsight.  We know the picture that God is working on as He puts the different pieces in place over weeks, months, or even years. But the people at the time had no idea of the significance of what was happening. They didn’t have that final picture. We might even think that some of the decisions people made were dubious ones: for example the decision of Mordecai and Esther not to return to Jerusalem, or the decision for Esther to participate in a competition which included spending a night with a pagan King. Yet through all of this, God was patiently working behind the scenes to put the necessary pieces in place.

Perhaps as you reflect back on your own life, you can see something similar. I know I certainly can in various events which have happened, not least in the way God put various pieces together in the years before David died, pieces which would turn out to be exactly what we needed when that time came. In the present, however, we don’t usually have the big picture. It can be hard to understand why certain things are happening, or even to remember that there is a big picture. But recalling how God has worked in the past, whether in our lives or in the lives of others, gives us hope for the present and future. It helps us to trust that, even though we may not be able to see the big picture, the One who can is in control, patiently putting all the pieces in place.